The Wollemi Pine (and I may also qualify)  is often referred to as a ‘living fossil’ and one of the greatest botanical discoveries of our time.

In September 1994, NSW National Parks & Wildlife Service officer and canyoner David Noble, came across some trees he didn’t  recognise in a deep canyon of  Wollemi National Park. They were what we now call Wollemia nobilis or the Wollemi Pine.

These tall and striking trees were thought to be extinct and grow only 150 km from Sydney.

We found ours in the plant nursery of Big W, Erina, and it has had a noble life in one of our inner city courtyards for the past three years. Secretly I have come to believe that Big W stands for Big Wollemi…

Anyway, as if responding to increased rainfall and no doubt a recent influx of new soil and fertiliser, Big Wollemi is becoming even scruffier and confusing by spouting new growth off very old branches which sometimes form at unusual angles to the original branch.

At the same time, it has developed a large waxy protuberance in the centre at the top which has made me quite nervous, especially since I watched Day of the Triffids last night. Which reminds me to ask, did anyone else devour John Wyndham novels as kid or am I the only one…

I’m certain the protuberance is nothing sinister, but giving the rarity of these plants, and the relatively short time they have been bred in captivity (if that’s possible for a plant) I’m hoping it is going to bring forth something truly pre-historic, such as a baby pterodactyl… but more likely just new branches…. If you don’t hear from me again, presume it was the former. (I also watched Jurassic Park 2 and 3 recently. Sorry.) 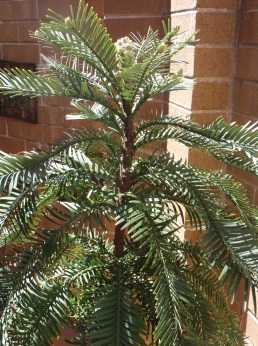