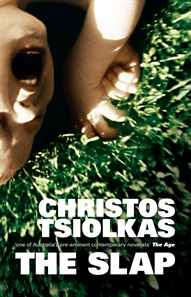 The television adaptation of Christos Tsiolkas’ 2008 novel The Slap is about to screen on ABC 1 and while it is a best-selling book in Australia and beyond, many of the television viewers will be encountering the story for the first time.

The Slap is an explicit novel – explicit in its treatment of nearly every bodily function and relationship dysfunction you can think of, or prefer not to think of. Oh, and did I mention the abundant use of legal and illicit drugs?

The television adaptation apparently holds little back and if that is the case, many will find reason why they can’t watch it, which is understandable, but a pity that some of the extremes of description were not moderated originally by the author. The story would not have suffered…

But that’s not his style and if you’re not sure if it’s your’s, check out a review of the book I wrote some time ago – it might give you some more insight, or a little more to offer around the water cooler tomorrow.