Media outlets are today reporting claims from a new book that Easter celebrations are a day late in marking the celebration by Jesus of the Passover before being crucified.

Many close readers of the Bible who have studied the Gospel accounts of the last week of Jesus’ life would have already considered the possibility of the Last Supper occurring on the Wednesday, rather than Thursday, before Good Friday.

The Gospels are not motivated by a desire to inform readers of exact dates – presuming early Christians were already well aware of these,  or because they were focused on the content of Jesus life and teaching rather than chronology. 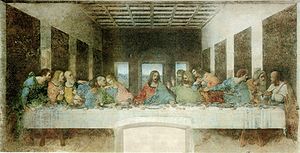 However as an historic faith, it is heartening to see scientists seeking to test accounts and find explanations for these eye-witness accounts, handed down over many centuries.

And while this latest book is unlikely to change the way Christians celebrate Easter (although perhaps we could argue for an extra Easter holiday?) it is a useful reminder that Easter is more than religious tradition, it remembers extraordinary events in the lives of real people, one in particular.

“‘One of the most famous meals in history is commemorated a day late, a new  book by a Cambridge University physicist claims,” the SMH report says.

“Professor Sir Colin Humphreys, who was knighted last year for his  contribution to science, argues that the last supper Jesus Christ shared with  his disciples occurred on Wednesday, April 1, AD33, rather than on a Thursday as  traditionally celebrated in most Christian churches.

“The theory would explain the apparent inconsistencies between the Gospels of  Matthew, Mark and Luke – which say the Last Supper was a Passover meal – and  that of John, which says Jesus was tried and executed before the Jewish  festival. It would explain another puzzle: why the Bible has not allowed enough  time for all events recorded between the Last Supper and the Crucifixion.

“Sir Colin’s book, The Mystery of the Last Supper, out this week, uses  astronomy to re-create  calendars, plus  detail drawn from texts such as the  Dead Sea Scrolls  to propose a timeline for Jesus’s final  days.”

Read more at the SMH’s New theory on date of last supper.

3 thoughts on “New Last Supper theory interesting, but not so new”