It’s not only Bert and Ernie who have been caught up in the gay marriage debate. One of Amercia’s biggest churches, Willow Creek, led by Ps Bill Hybels, found itself in the eye of the gay-lobby storm during its Global Leadership Summit.

Australian minister, researcher and author, John Dickson, is one of the speakers for the event and has been tweeting about his experience. Another speaker was to be Starbucks chief executive, Howard Schultz, but he cancelled after an online petition condemned Willow Creek as anti-gay – a charge the church denies.

Bill Hybels and Willow Creek have a large following in Australia and have done a great deal to help Christians think about how churches might be more accessible to the un-churched while retaining their core Christian values. Hybels is particularly influential in encouraging church leaders to develop their leadership skills.

In explaining the withdrawal of Schultz, Hybels denied that Willow Creek persecuted gays, as the online petition alleged.

The SMH reports: ‘Mr Hybels said that Willow Creek did expect its members to follow biblical ethics and reserve sex for marriage between a man and a woman, but welcomed worshippers of all backgrounds.

“To suggest that we check sexual orientation or any other kind of issue at our doors is simply not true,” Mr Hybels said. “Just ask the hundreds of people with same-sex attraction who attend our church every week.”

at any future summit.

And in a strange mega-church-Starbucks cross-fertilisation, Starbucks has been printing on its coffee mugs segments from Rick Warren’s best-selling book, A Purpose Driven Life. Warren is the pastor that other well-known American mega-church, Saddleback Community Church in California. Holding very similar beliefs to Willow Creek, it seems Starbucks may be at cross-purposes…

Oh, and as for Bert and Ernie of Sesame Street fame? A online petition has been launched calling on the creators of Sesame Street, the Children’s Television Foundation, to allow the two muppets to marry. This follow new laws in New York allowing gay couples to marry. 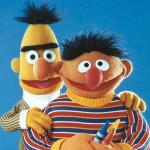 CTF released this statement in response: “Bert and Ernie are best friends. Even though they are identified as male characters and possess many human traits and characteristics (as most Sesame Street muppets do), they remain puppets and do not have a sexual orientation.”

On ABC radio in Sydney this morning, Adam Spencer came out in support of the marriage of Bert and Ernie using as his justification Miss Piggy’s relentless pursuit of Kermit. In a stunning loss of logic for the mathematical Spencer, he seemed to overlook the fact that Bert and Ernie are Sesame Street characters created entirely for the benefit of children while Miss Piggy is a Jim Henson creation, made for programs aimed at adults more than children. As well, it doesn’t follow that every same-sex relationship – such as life-long friends – has to be, in anyway, homosexual. Or sexualised in any way…

The debate goes on…