Christmas as we know it has been culturally crafted over thousands of years around a base narrative concerning a family in Roman-occupied Israel.

Each December various scientists, atheists and pot-shotters are trotted out with their latest theories debunking Christmas and erstwhile Christian intellectuals and apologists bravely rally to defend the seasonal ground. Others argue over various cultural accoutrements to Christmas such as dates and customs and commercialistation. They act as if the average person is not intelligent enough to distinguish between later attempts to mark something significant and the significant thing itself.

Certainly the habitual attacks on the historical origins of Christmas or Easter or any Christian belief along with the confusing but largely irrelevant criticisms of the cultural artefacts that accompany those traditions, have a gradual, destabilising effect on the faith of the wavering or nominal who are probably the majority of believers in our nation. Around the globe however the effect is infinitesimal and Christian faith continues to thrive and multiply in amazing diversity with scant disregard for broadsheet column centimetres.

That is because at the heart of it, the Christmas story – to quote myself – ‘a base narrative concerning a family in Roman-occupied Israel’ is so shockingly familiar to our own human experience it reaches us where the debunkers and apologists never could, in the messy, bloody birth waters of our soul.

Here are just a few examples, in no particular order: 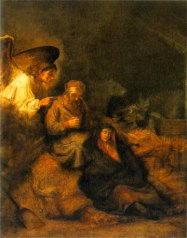 A man having disturbing dreams

Joseph, the human father of Jesus, has disturbing dreams about what he should do in relating to his fiance and later, the safety of his small family. What man hasn’t had disturbed sleep over his blundering uncertainty in relationships or the primordial fear of losing through calamity those he loves beyond words. How many people in our world right now are on the knife-edge of a perilous decision that Joseph also faced of whether to ‘flee to Egypt’ in an attempt to preserve the life of his family or stay among the occupiers and risk their sword.

A woman pregnant and vulnerable

One of United Nation’s Millenium Goals relates to the health of women in recognition of their vital contribution to families, children and communities. Mary finds herself pregnant outside cultural norms, most likely to be disposed of by her husband-to-be and with her only explanation reminiscent of “God made me do it”. Like women the world over, she finds a deep inner peace through choosing to identify with faith and hope and courage and the rightness of her state and brings a baby into the world in the hardest of circumstances.

The Roman puppet Herod fears any disturbance in his kingdom and with the Jews, those disturbances are usually religious. Perhaps he tells himself that it is better he cuts off opposition before it gets too far, rather than bringing down Roman wrath. Or maybe he ruthlessly scours the networks of rumours, prophecies, undercurrents and whisperings in a desperate attempt to preserve his own opulence. Either way he sends the sharp knife of infanticide to Bethlehem to rid himself of the worry, to the anguished scream of mothers. We have forgotten in the west how easily people die still today because they are the wrong religion, tribe, language or simply because they are in the wrong place. From children dying from errant bombs in Afghanistan to ethnic cleansing in Africa to the Killing Time in our own colonial past, mothers are still screaming. 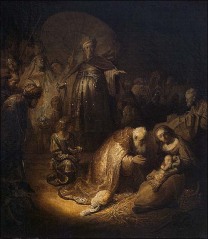 Unbounded potential in each new life

How readily we hold a baby, take in its smell of new life and believe in all kinds of good and potential, shrugging off the heaviness of the age, whatever form that might take. We find this too in the story of Christmas with the added accompaniment of angels, shepherds and wise men. But surely angels sing for every new life, we simply do not attribute the sound we hear rushing through our hearts. Surely shepherds still gather, the everyday members of inner circles in all their frailty and eccentricity, gathered to witness the miracle of life and be renewed themselves. Surely wise people search the world for news of how new beginnings might be wrought, and rush with words and gifts to urge life on its way.

All of this and so much more of Christmas resonates with our humanness, ensuring its continued power, despite the jaded Western view which will in time, without doubt, give way to resurgence of belief. Carried along with all that we identify as Christmas is a knowing that there is more than just this, there is Someone reaching out through this human tale to connect us to what is more than human. And despise this thought as you might, and fortify against it with regurgitated arguments, still, the oldest of ideas, of a God who made us, loves us and wants to walk with us in the garden of life, finds its mark in the recesses of our soul. It is in the makings of us, we can hide from it, reason it out of existence but it is imbued and will remain.

One thought on “Christmas speaks to the messy, bloody birth waters of our soul”