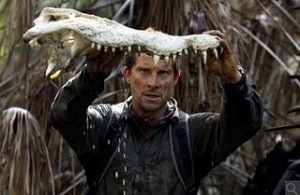 Admitting that speaking to an auditorium full of people is scarier than most of his Man vs Wild adventures, he also revealed how he got his nick-name, Bear.

Rather than arising from ‘wrestling a bear when I was 3’, Grylls explained that his real name is Edward, which was shortened to Ted, and then Teddy, on to Teddy Bear and finally just Bear.

For more on Bear Grylls and his views on God, visit my previous Bear post. He also has his own blog where he describes making a show in an Australian swamp as one of his hardest yet. You might also like to visit the charity page on the blog, and see how he uses his fame and fortune.

Speaking of which, he said fame and fortune were two things that caused him the most trouble which may be why he supports so many charities.

Oh, and the worst thing he’s eaten was a toss-up between raw goat testicles and bear poo…

Bear Grylls has been in a lot of tough places but the side of a Sydney bus might just be the toughest of all… But that’s exactly where he’ll be shortly, featured in an advertising campaign encouraging fans to discover life’s ultimate adventure, The Alpha Course. Apart from Sydney, the campaign will also run in Melbourne, Brisbane and Perth to coincide with the visit of Alpha’s international Chairman Ken Costa.

Bear Grylls is the star of Man vs Wild, the Discovery Channel’s most popular program and also screening Monday nights on SBS. 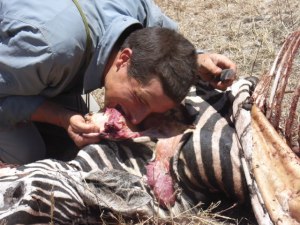 A few young Christian men I know got together recently with the big highlight of their evening being watching Man vs Wild featuring Bear Grylls.

Turns out it was a more spiritual activity than they may have realised with Grylls revealing this month in Relevant magazine that he is a strong Christian.

The wild life adventurer who allows himself to be dropped in remote locations so that he can be filmed attempting to survive, says that he had a ‘natural’ faith as a child, although hasn’t always found believing easy.

‘It’s been kinda a wiggly, messy journey which is still continuing,’ Grylls told Relevant, a description that might also suit his TV show.

urns out Grylls is an avid supporter of  Alpha, a 10 week introduction to the Christian faith, written and presented by Nicky Gumble of Holy Trinity Brompton.

Gumble, a mentor and friend, says of Grylls, ‘I think Bear has a very simple faith. And simple in the good sense of the word.  It’s a strong personal faith and he lives it out in his everyday life.’ PH

PS. Man vs Wild screens on SBS Mondays at 8.30pm and SBS says ‘the program has performed strongly since its debut with an average audience of 535,000 metro viewers.’