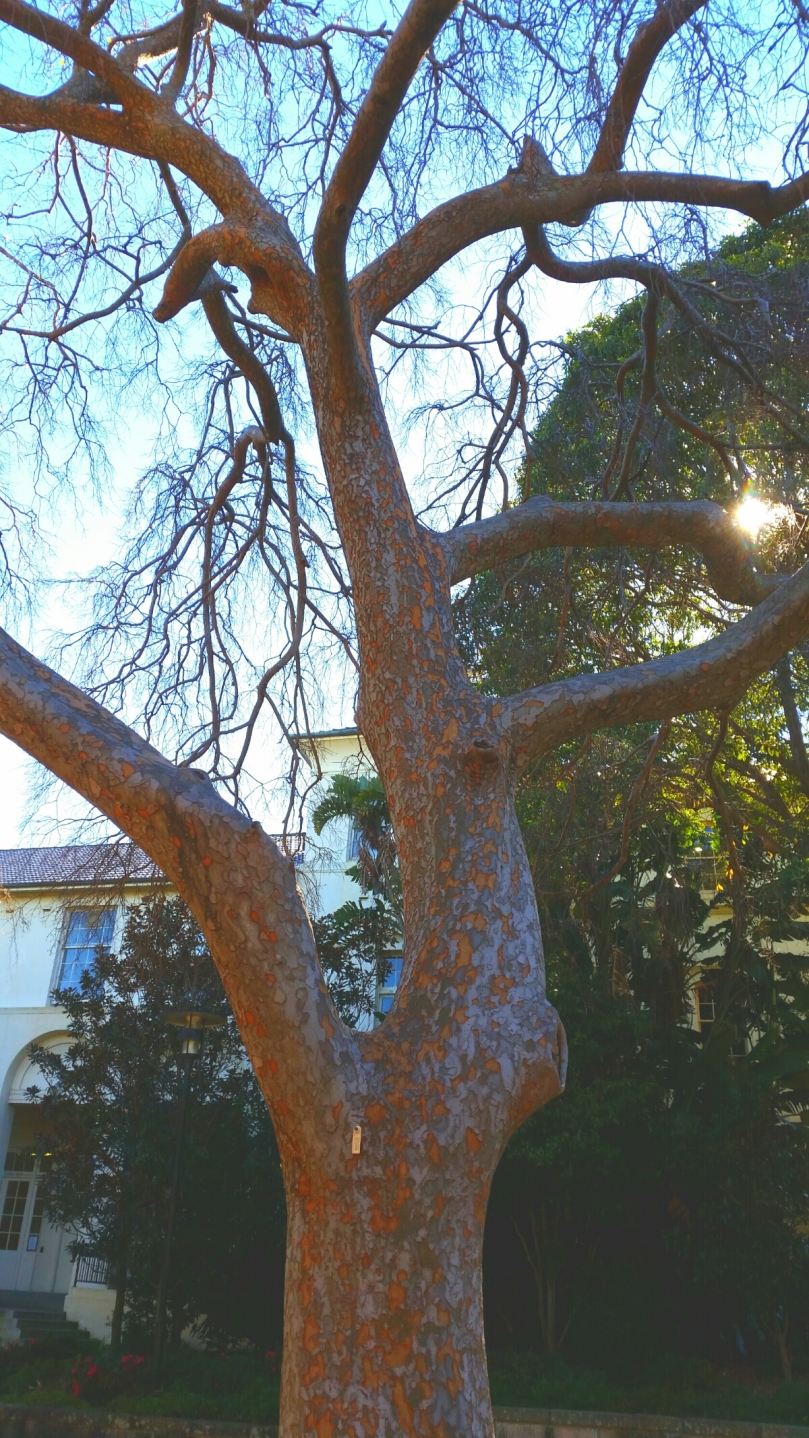 I was walking in the sunshine at University of Sydney with my little grand daughter who needed a short break from church in the old Geology building.

We came across a tree (pictured) with beautiful patterned bark, soft and flakey, and gentle spindly branches that were almost silhouetted against the blue sky.

I laid my hand against the trunk and felt its warmth and encouraged Maddison to do likewise. She reached across and rested the palm of her hand on the tree.

I stepped back to photograph the tree which had won my heart and as we began to move on I noticed a tag or label nailed to it.

END_OF_DOCUMENT_TOKEN_TO_BE_REPLACED

To mark 100 years today since the assassination of Archduke Franz Ferdinaz of Austria and his wife Sophie, here’s a chapter from my unpublished WW1 novel, Shot: a great war story, that among other things retells the events of that day.

‘One comes here for a visit and is received with bombs…. It is outrageous!’

Franz had never felt so furious. How could this be, how could they let this happen? To think that his life and that of his Sophie had been in mortal danger from the actions of some fool in the crowd.

He saw again the slow loop of the explosive as it headed towards them, first bouncing off the bonnet of the car, before he had instinctively swatted at it, knocking it away. Then only to learn that Eric and the Count had been badly wounded in the car behind. And now this simpleton of a mayor is intent on giving a welcoming as if nothing has happened.

What point is there after what has happened? Franz thought. Someone has tried to kill us! The realisation of how naïve he had been, how unrealistic, began to dawn on him. He turned to Sophie, feeling her trembling, seeing her lip quiver, and reached to wipe a tear, then noticing a slight graze on her cheek.

‘Sophel, oh my dear wife, I see you have been injured in the blast. My God, how close we have come to tragedy!’

She flinched from his touch, produced a handkerchief from her sleeve and dabbed at the graze.

‘I am all right, Franz, do not fuss. We must not be overcome by this. Look, the people do really love you,’ Sophie said,  whispering in his ear. END_OF_DOCUMENT_TOKEN_TO_BE_REPLACED

Bastille Day seemed to us Australians something like a mix between Anzac Day and Australia Day with fewer barbecues and more tanks and fighter planes.

There were lots of crowds moving quietly to watch parades, flyovers and fireworks and just as many watching the passing crowds from the forward-facing chairs of cafes.

As we arrived at the fireworks, a short walk from where we are staying, it was somewhat like Sydney’s New Year’s Eve fireworks only the iron of the bridge had morphed into a giant tower.

So conditioned am I by the Sydney event, when the fireworks were under way I kissed my wife and said Happy New Year! Or perhaps that was just an excuse… Enjoy our small photographic selection

December 1 tomorrow and a traditional date for many to put up their Christmas tree while listening to carols and eating cherries – in the land down under at least.

But increasingly it is also the day when bathrooms across the nation are littered with much-loved or much-maligned facial hair as it is removed to mark the end of Movember.

The moustaches, including my own, are somewhere in the range of impromptu, uncalled for, optimistic, unrealistic, threatening, questionably bushy, occasionally beautiful and down-right awful but regardless, most of them will go.

To give the many readers of Utterance (he says hopefully) an opportunity to give to the worthy cause of men’s health – prostate cancer, depression – I’m posting this final-hours photo of my Movember mo (with Oscar N in the background) and whilst wearing my Mr Mo shirt. END_OF_DOCUMENT_TOKEN_TO_BE_REPLACED

Utterance reported on Wednesday that the Royal Agricultural Society, organisers of Sydney Royal Easter Show had refused the Bible Society of NSW a stall on the basis that it was of a ‘religious nature’.

More than 200 volunteers and thousands of resources had been arranged for the Easter, All About Life stall that was to be linked to the recent Jesus, All About Life media campaign.

Fittingly, Jesus did make an appearance at the Show today about 1pm thanks to the heavenly intervention of a sky-writer.

With the sun as an exclamation mark, Jesus All About Life appeared brightly in white against a brilliant blue sky, easily visible at the show in Homebush Bay. The words spread broadly in the gusty wind covering the whole city.

They made quite an impression in Sydney’s inner west where I managed to take the photos above on my trusty Nokia E71 phone and also an Olympus MU9000. Of course, the mandatory buildings, telegraph wires and even an obliging plane accompanied my city pics.

It’s good to be reminded that even the day the Jesus was crucified is Good and is all about life! PH

Utterance, an attempt to encourage reflective pauses and thoughtful communication, has just recorded 2000 visits – not including my own!

This may be a result of family and friends visiting the site 20 times a day, but hopefully it is an indication that an invisible community of people have been connecting and finding something here that enriches their day.

Utterance is a conglomeration of creative expression, timely information, spiritual devotional, critical comment and reflective observation and half the time, I don’t know which is going to come next.

And then there is the side-bar… glowing with widgets, I wonder if you noticed, that among all the ways you can search or subscribe,  it feeds news from Christianity Today and shows Utterance on Twitter – Twutterance – although I’m yet to find time to get this moving regularly.

As to where this is heading, the best part is not knowing. PH

‘I saw a man coming, as it were from Ireland. His name was Victoricus, and he carried many letters, and he gave me one of them. I read the heading: “The Voice of the Irish”. As I began the letter, I imagined in that moment that I heard the voice of those very people who were near the wood of Foclut, which is beside the western sea – and they cried out, as with one voice: “We appeal to you, holy servant boy, to come and walk among us”.’ Patrick of Ireland from his letter, Declaration.

In his own words, we learn of a call, not unlike Paul’s to Macedonia, to go to Ireland, where he had previously been a slave, and ‘walk among us’.

The same God calls us today to walk in places where we were once slaves, and graciously and lovingly demonstrate the love of God.  The God of redemption takes the very prison that enslaved us and turns it into a field of salvation, if we choose to walk there. PH

I gave someone this advice today, spontaneously, and decided it was worth repeating:

‘Don’t give satan too much credit. Timing is usually God’s domain; trust and patience ours’.

Now, to take my own advice, that’s the real key… PH

Today I- followed up a young person we rescued from a dangerous situation on the weekend; listened as an elderly believer shared her life story with me; lifted chairs with a man from our community lunch who used to swear constantly but now only says ‘bloody’; helped a neighbour park a car; started setting up our office after re-location; picked my wife up from work, on time; remembered to book dinner our for our anniversary tomorrow night; drove to Bowral and back for the wedding rehearsal of a young couple I’m marrying on Saturday; froze as the mist descended; hugged a friend just returned from overseas; watered my tomatoes; learned that the father of a friend has tragically died from injuries sustained in a car accident; prayed.